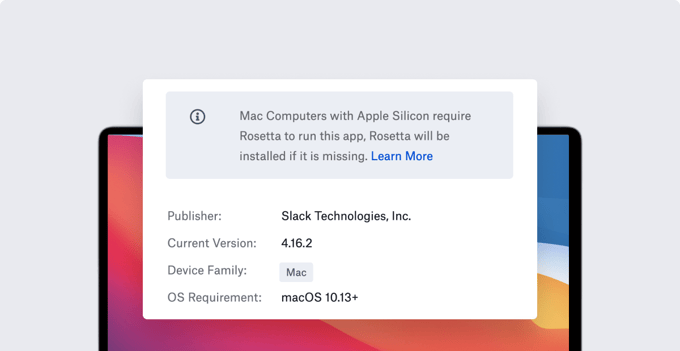 What Mac Admins Need to Know about Rosetta 2

The release of macOS Big Sur and Apple silicon in 2020 brought a lot of changes to the Mac environment. Apple introduced Rosetta 2 to help make those changes easier for developers and for Mac admins, by enabling code designed for older Intel-based hardware to run on the new Apple systems. As the transition to Apple silicon continues, with the ongoing release of new Mac computers using the M1 chip, Rosetta 2 still has a role to play. Here’s what you as an admin need to know about it.

Apple made Rosetta 2 for similar reasons, this time to assist in the transition from Intel to Apple silicon. Apps—as well as plugins, add-ons, and extensions—created for Intel-based computers can’t run natively on Apple silicon devices. But with Rosetta 2, such apps can be translated so they run on Apple silicon. In its documentation, Apple says Rosetta 2 has no noticeable impact on performance.

Although Rosetta 2 is a powerful tool that can help streamline the transition to Apple silicon, it still has one major issue that Mac admins need to deal with: It isn’t installed by default in macOS. And yet the problem that Rosetta 2 was originally designed to address—the fact that some important Mac apps don’t come in Universal builds—is still a thing. Here’s how to deal with both issues.

(Note: For the sake of simplicity and for the rest of this post, we’ll refer to Rosetta 2 simply as “Rosetta.”)

The first and most common situation is when a user tries to open an app that hasn’t been updated for a Mac with Apple silicon. The first time, macOS will display a prompt to install Rosetta (unless it's already installed). The user needs to provide administrator credentials, then wait for the installation to complete. 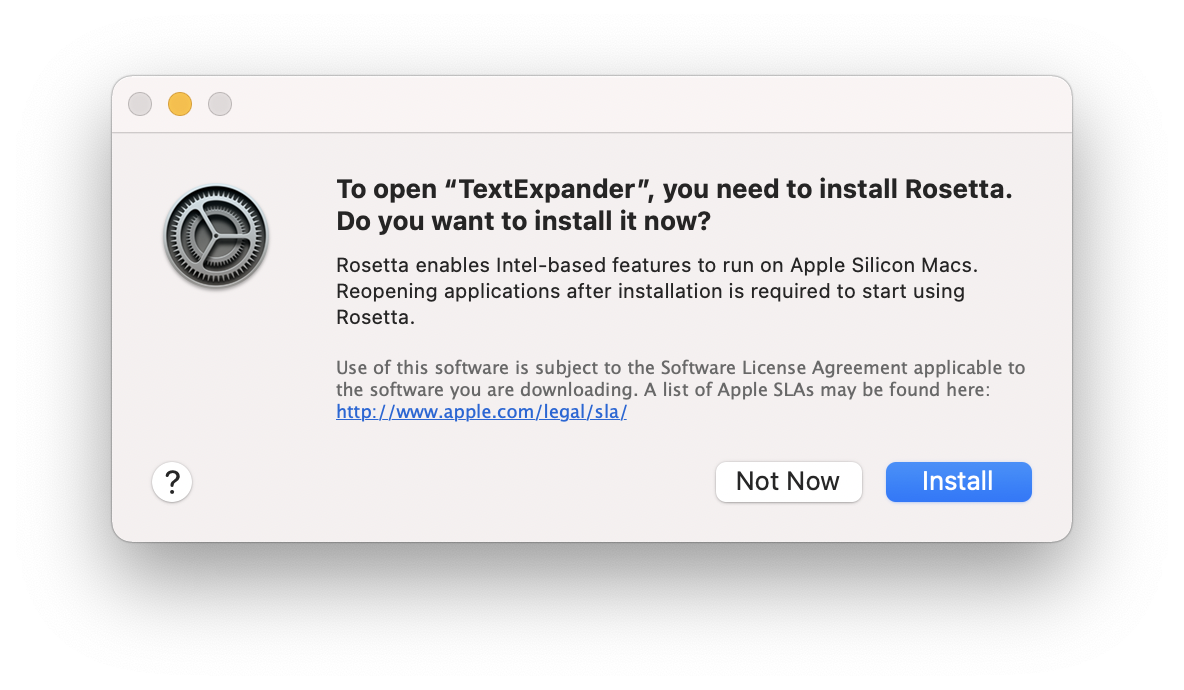 The second situation is when a user tries to install a package that hasn’t been updated for Apple silicon. In that case, the installation will simply fail if Rosetta isn't already installed. After Rosetta is installed, you as an admin can use it to run package installers for Intel-based apps, plugins, extensions, and other add-ons that haven’t yet been recompiled as Universal apps.

If an Intel-based app that requires Rosetta is in Kandji’s library of Auto Apps (pre-packaged apps ready for deployment), you will see a warning on that library item. The Kandji Agent will automatically check for and install Rosetta as needed. 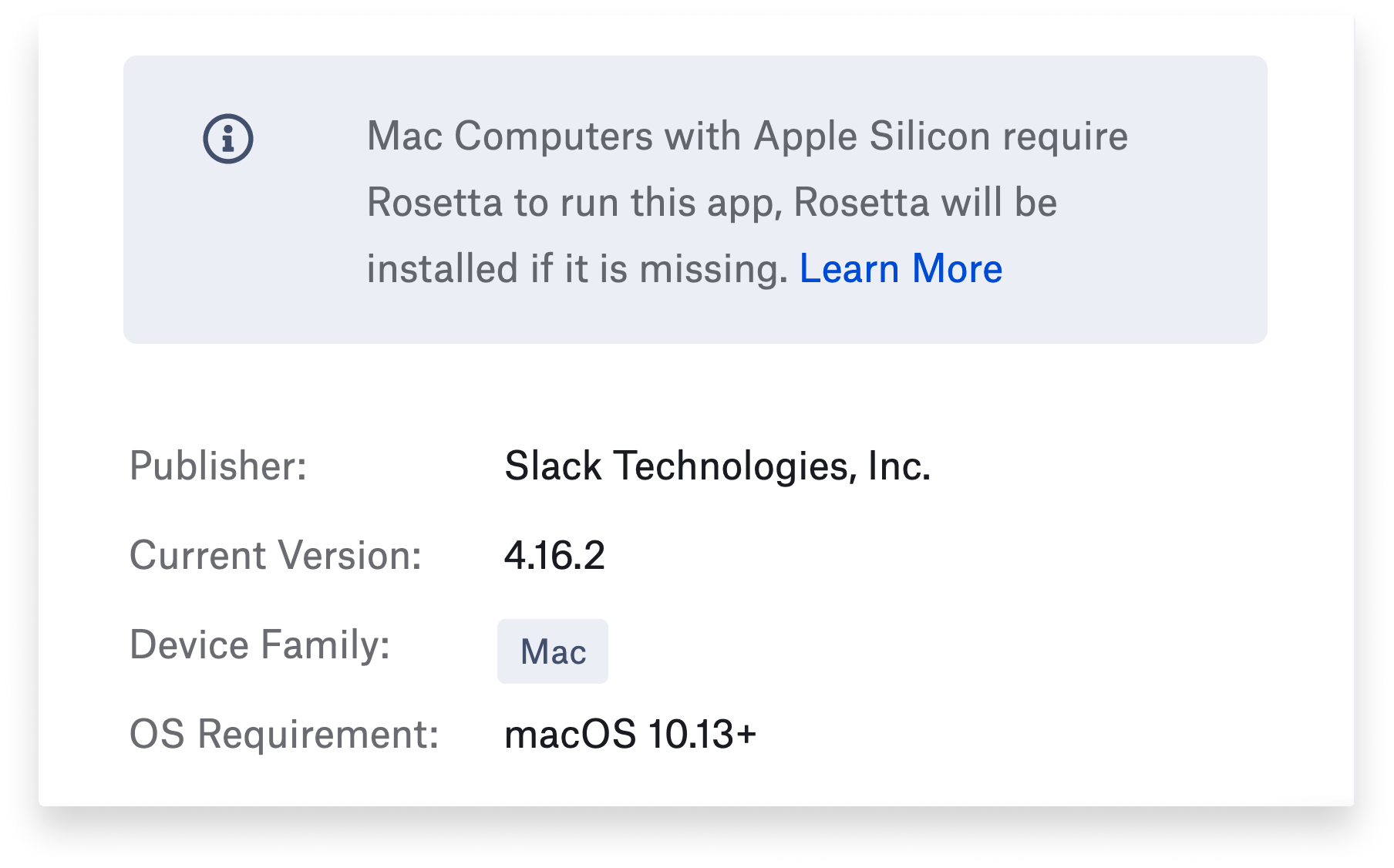 If you don’t have an MDM solution, you can also install Rosetta using the softwareupdate command. For an interactive installation (which requires agreeing to a Rosetta license prompt), enter the following command in the command line interface (which you can access with the Terminal app):

A non-interactive installation automatically agrees to the license. To begin that, enter the following command:

Rosetta isn’t intended to be a long-term solution for developers. It just gives developers extra time to update their apps to Universal builds, which can run on both Apple silicon and Intel.

But some apps still lack Universal builds. This includes apps from major vendors, such as Adobe which at the time this article was compiled had completed Universal builds for only two of its eighteen major programs. (Even then, one of those apps—Photoshop—natively supports only plugins built for Apple silicon devices; other Photoshop plugins require running the app in “Open with Rosetta” mode.)

If you use apps that don’t include Universal installers yet, the first thing we recommend is that you send feedback to those vendors about providing them.

The next step is to identify which apps still require Rosetta. In Kandji, you can do that with audit scripts that identify whether an app has an Intel-only or Apple silicon-only installer package, then determine whether that installer should run or not.

The Info window for Universal apps includes a checkbox setting “Open using Rosetta.” This setting is intended for apps that use add-ons (such as email apps, web browsers, and more) that haven’t been updated for Apple silicon.

If the plugins or extensions for these apps aren’t being recognized, you can quit the app and run it again after checking the “Open using Rosetta” box. This should make the plugins and extensions compatible with Apple silicon.

The key thing to remember is that Rosetta is a temporary solution. Apple introduced the technology to give developers time to build Universal binaries for their apps. It will become obsolete once those developers have all released versions of their apps that work on Apple silicon. But that could still take time, even now. In the meantime, Mac admins will continue to need the code translation that Rosetta provides and manage systems that require it. And, again, you can contact developers and ask them to please release Universal versions.

With innovation and iteration at the core of everything we do, Kandji constantly building solutions to give you more of what you need and improve upon features you already love. With Kandji, you can be confident that your Apple fleet is in safe and secure hands from deployment to retirement.