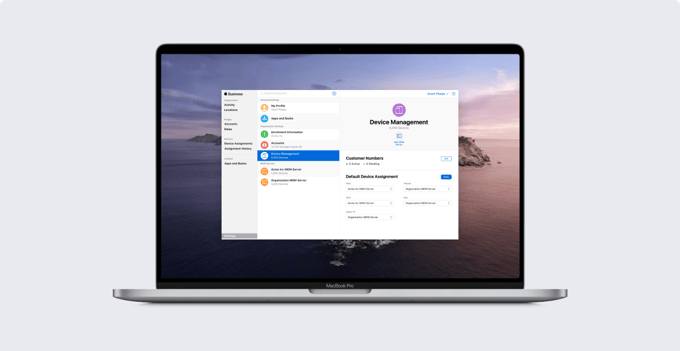 The Future of Mac Device Management with macOS Catalina 10.15

Apple for business is growing. Modern businesses are choosing to run on Apple, and they are redefining how work gets done on iPhone, iPad, and Mac.

For Mac specifically, there are many things we are excited about in this release of macOS Catalina 10.15. We’ve noticed a thoughtful commitment to macOS in the workplace by ongoing support of the MDM ecosystem, investment in growing the MDM protocol, identity and SSO innovation, and nods to BYOD. The common thread through many of the changes was a balance of values between security and manageability, woven together to create a delightful user experience.

We’ve spent the last few months in the weeds with the new device management documentation and beta software (and the last decade living and breathing Apple device management). This post will explore what’s new in 10.15, why it is a testament to the growth of Apple for business, and specific ways that Kandji is fully supporting it.

We’re ready, are you?

Before we dive into the details of how device management will look different with macOS Catalina 10.15, we want to confirm that Kandji supports macOS Catalina from day zero.

All new functionality within Kandji has been fully tested within the beta program, so you don’t have to worry about any friction during your OS update.

However, as a general best practice, we recommend taking some time to thoroughly test in your own environment and letting Apple come out with its first “point” update (in this case, macOS 10.15.1) before rolling out the new macOS to your organization. After that, you can roll out the update smoothly to take advantage of the new security enhancements (we dive into detail on these below) and allow your users to access practical new features.

The list of specific changes within macOS Catalina 10.15 is long, so we will only highlight here the ones we find most critical for an IT admin managing Apple devices to understand and prepare for. For the comprehensive list, refer to Apple’s developer resources and support site.

The common theme we observed in the many security enhancements provided through macOS Catalina 10.15 is that the goal is to strike a balance between manageability and user productivity. We also noticed a strong support of the MDM ecosystem through enhancements like Enrollment Customization and mandatory device enrollment with Apple Business Manager, which will empower IT professionals to ensure every single device is managed and protected.

Piloting an organization-wide OS update can be daunting — we know because we’ve been there. Before we were Kandji, we ran an Apple-certified IT firm that helped modern businesses manage Apple devices. From the strong knowledge base we gained, as well as experience deploying every other MDM solution on the market, we recognized a need for an Apple MDM solution that could accommodate growing businesses and increasing regulatory demands. With Kandji, we are ready to push macOS Catalina 10.15 to its limits in the workplace.