In the old days, IT was very top-down: Users had to call the IT department for help with everything from a busted keyboard to installing a new version of Word. In time, an admin would physically go to the employee’s desk to solve a problem.

But that was then. In recent years, IT has become much more democratized. The modern admin knows that the best way to help users is often to let them help themselves.

“Self-service”—as this more enlightened IT philosophy is known—doesn’t mean anarchy, with users scrounging up their own hardware and downloading whichever apps strike their fancy from whatever source they can find. Self-service just means giving users the tools they need to fulfill the most common IT requests on their own while minimizing demands on admin time.

At some organizations, self-service means employees go to a designated web portal to submit help tickets, order new computers, and make other IT requests. But in the context of device management, self-service is more specifically scoped: It means giving users the tools—typically an online interface or app—from which they can download software, submit those help tickets, and connect with other company resources.

Back in the old days, IT installed and configured everything for users. When provisioning Mac computers, admins would commonly compile an image that got blasted onto every device. That image could take weeks or months to create because it needed to contain everything users might ever need. It also meant that employees had a lot of apps on their computers that they never used.

Installing all that extra software cost users precious hard drive space, increased licensing costs (or, worse, meant software went out without licensing), and required admins to push updates in a mostly manual way. And if the image needed a small tweak, it was back to the drawing board to build the image again.

This approach also assumed that provisioning was done by IT from one central location, with big bandwidth and (usually) direct physical or network connections to all those computers. Remote work wasn’t a primary consideration—and those who did work remotely didn’t always have high-speed connections. It would take forever to install the Adobe Suite on those remote devices later. So why not just install it from the get-go, as part of that monolithic image, just in case a user ever needed it?

Several things have changed to make it unnecessary and unwise for IT to completely pre-provision Apple devices.

First, remote work is now ubiquitous. People are no longer on the office network, so provisioning by hand and then delivering a computer to the user’s desk isn’t practical. Neither is blasting out all the apps a user might need— especially because some users might still have constrained bandwidth.

Furthermore, the spread of Apple devices in the enterprise—often driven by employee-choice programs and the popularity of Apple for personal use—has made users comfortable with the Apple way of doing things.

If you think about iPhone and the App Store, it's not like Apple pushes down every app in the ecosystem onto every device. Rather, there's a baseline of Apple apps installed on every device. (In fact, when you first turn on a device that has been factory reset these days, sometimes those apps aren’t actually installed; they’re just placeholders for apps that will download if and when the user first tries to launch them.)

Users have become accustomed to having things on those Apple devices set up their way. Empowering users to take more responsibility for their own devices—aka self-service—is the logical path forward.

The toolset has also changed. Apple stopped supporting imaging for Mac computers many years ago. Apple provides forward-thinking tools like Apple Business Manager that allow for Automated Device Enrollment and bulk purchasing of apps and books from the App Store. The combination of Apple Business Manager and a device management solution provides a full toolset to support users regardless of their geographic location (as long as they have an internet connection).

Why Self-Service Is Good for IT

Self-service doesn’t necessarily mean that IT doesn’t provision computers at all. Rather, it typically means that IT will install a baseline set of required applications and settings that users must have—typically communications tools. These are automatically installed, often using zero-touch deployment with MDM, the first time a user starts up their device. You then let users install the other apps and configure the settings they want.

You can control access to specific apps are made available only to certain users. This helps control licensing costs. For example, maybe you purchased enough copies of Final Cut just for your video team. No problem. Just assign them to that team and keep your license count—and costs—under control.

All of this reduces the burden on admins because they no longer have to touch each device. It reduces help-desk calls because users can often help themselves before they need to reach out.

Why Self-Service Is Good for Users

For one thing, the first-run experience can be faster, because users don’t have to wait for a lot of unnecessary applications to download and install.

More importantly, it gives them a sense of ownership over the device. That fosters a sense of responsibility. Self-service means the device is as much theirs as it is the organization’s.  And that, in turn, can foster a better relationship with IT. It’s a way for the organization to say, “We trust you, so we’re empowering you.”

And it’s not like self-service is all-or-nothing. It’s not like you’re leaving everything up to the user. IT can still control what it needs to control. It’s just ceding the control it doesn’t need. So, for example, in Kandji, you can automatically install software in a way that you control (whether it's from the Apple App Store, Auto Apps, or a custom app) or you can make those apps available via Self Service in the Kandji app, which users control. Both approaches can co-exist.

How to Get Started with Self-Service

To design your own self-service program, start by thinking about what software all of your users will need. It’s tempting to think they need everything, but resist that urge. Include a conversation with your users in the discovery process, to find out what they think is essential. Once you’ve determined that must-have list, set up a provisioning workflow to install it automatically

Next, determine what other apps you would like to make available for users to install on their own; these are the ones you’d add to your self-service.

Once you have your strategy, it’s time to put it into action. If you don’t have a device-management solution, you can create your own IT self-service portal from scratch—but that will take time and effort. You need to create a website or use another tool that provides an interface for users to access. (Some help-desk solutions provide this functionality.)

Don’t forget the ongoing maintenance such portals require. When you add new apps, or when new versions of existing ones are released, you have to remember to link to or upload them. You also need a way to control access.

This is all why using a device-management solution with built-in self-service tools makes sense.

However you build out self-service, don't forget to tell your users about it. Mention it during onboarding and link to it from your company's IT pages. Put it front and center in the Dock on Mac computers and automatically install it on managed iPhone and iPad devices.

Kandji lets you empower users, giving them access to the apps and tools they need when they need them. It’s just one more way Kandji helps Apple admins maximize their own efficiency. The Kandji team is constantly working on solutions to streamline your workflow and secure all of your Apple devices. With powerful and time-saving features such as zero-touch deployment, one-click compliance templates, and plenty more, Kandji has everything you need to bring your Apple fleet into the modern workplace. 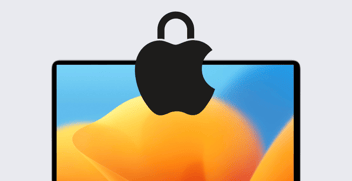 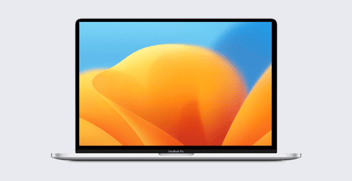 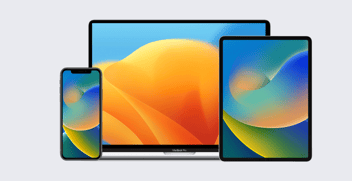 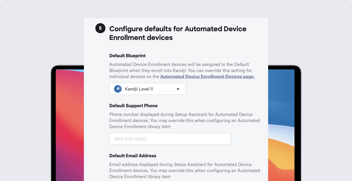 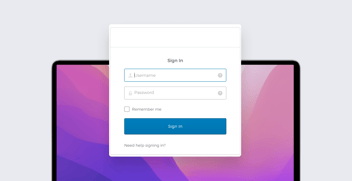 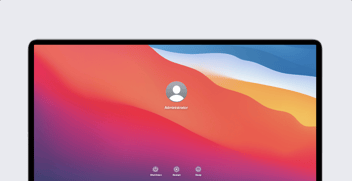