If your business is using Microsoft Azure Active Directory (Azure AD) as your identity provider, then you can use Federated Authentication to connect your instance of Azure AD with Apple Business Manager to create a seamless login experience for your employees. 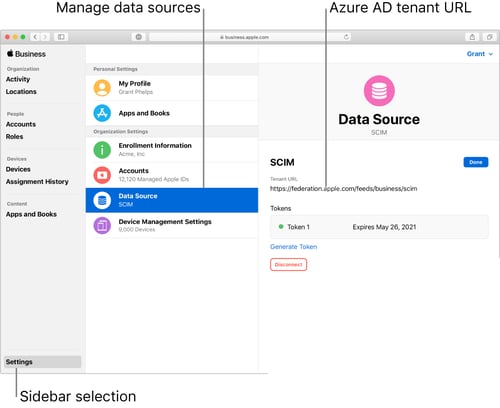 While using the feature, the account information in Apple Business Manager is locked in read-only mode. However, once you disconnect from SCIM, the accounts can be edited manually. This includes Azure AD account roles, which defaults to “Staff,” but can be edited in Apple Business Manager once disconnected from SCIM (more information on roles here).

How Does SCIM Differ from JIT?

Now that Apple has introduced support for SCIM, a new path has opened up for IT, allowing you to continue using JIT or switch to this functionality. The main difference is that SCIM supports both automated provisioning from Azure AD to Apple Business Manager and automated deprovisioning.

How to Setup and Configure SCIM

Note: Once you turn on provisioning, the initial Azure AD sync will begin immediately. After that, syncs will be triggered every 20 to 40 minutes.

Before you begin using SCIM, Apple recommends doing the following:

From deployment to retirement, Kandji keeps your Apple devices safe and secure with a suite of features such as pre-built security settings, zero-touch deployment, one-click compliance, and much more.