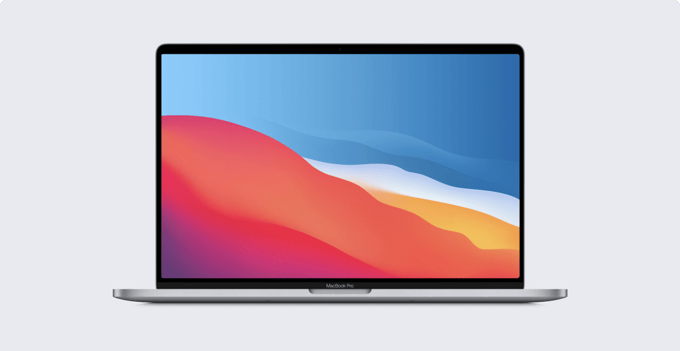 When macOS Big Sur was first unveiled at the Worldwide Developers Conference (WWDC) 2020, it was clear that Apple was bringing significant changes to the Mac. Beyond completely overhauling user-facing features and design, they’re also making a lot of changes with device management in mind.

In this article, we’re going to take stock of the biggest MDM-Big Sur changes, talk a bit about their implications for device management, and share some tips to make your transition to Big Sur smooth.

We’re going to cover a lot of ground here, so here’s an overview of what you’ll find in this article:

There are a lot of exciting changes in macOS Big Sur, but transitioning managed devices to the new operating system is going to be a handful for IT administrators. In beta season, it’s a good idea to be running software and service tests to make sure this transition is as smooth as possible.

That’s why we wrote a comprehensive guide to managing public betas on macOS Big Sur. We cover everything you need to know about device management & Big Sur, including:

We've gotten a lot of questions on how best to manage the deferral and upgrade process, so we surveyed a handful of Mac admins in the community to learn how they are managing the process of deferring software updates and upgrading to Big Sur. To get their advice, read our article 7 Mac Admins Share Perspectives on Deferring and Upgrading to macOS Big Sur.

In macOS Catalina, supervision came to the Mac – but it wasn’t nearly as robust out as device supervision on iOS, iPadOS, and tvOS. Supervision on the Mac is really just a change in wording, making anything that once required “DEP enrollment” require “supervision.” 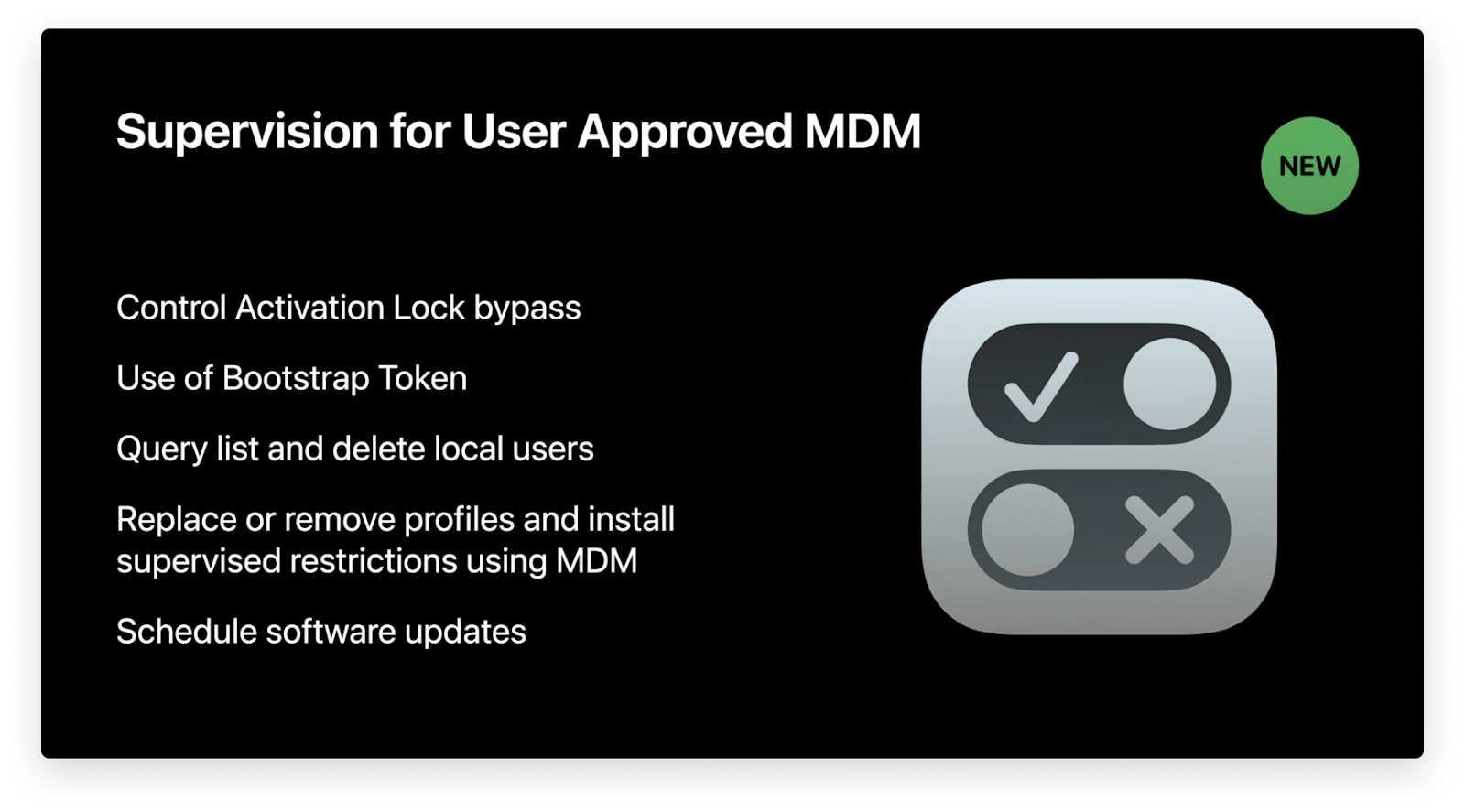 In macOS Big Sur, that changes. At WWDC 2020, Apple announced that macOS devices enrolled via manual Device Enrollment with a User-Approved MDM status will also be considered supervised. There is a small caveat to this method of achieving device supervision, which is discussed in the Kernel Extension portion of this guide.

Auto Advance has Come to Mac

Auto Advance is an enrollment feature that makes it faster to set up devices at scale. The Auto Advance capability was initially introduced to streamline Apple TV device deployment. IT simply had to enable Auto Advance on any Apple TV that leveraged Automated Device Enrollment. 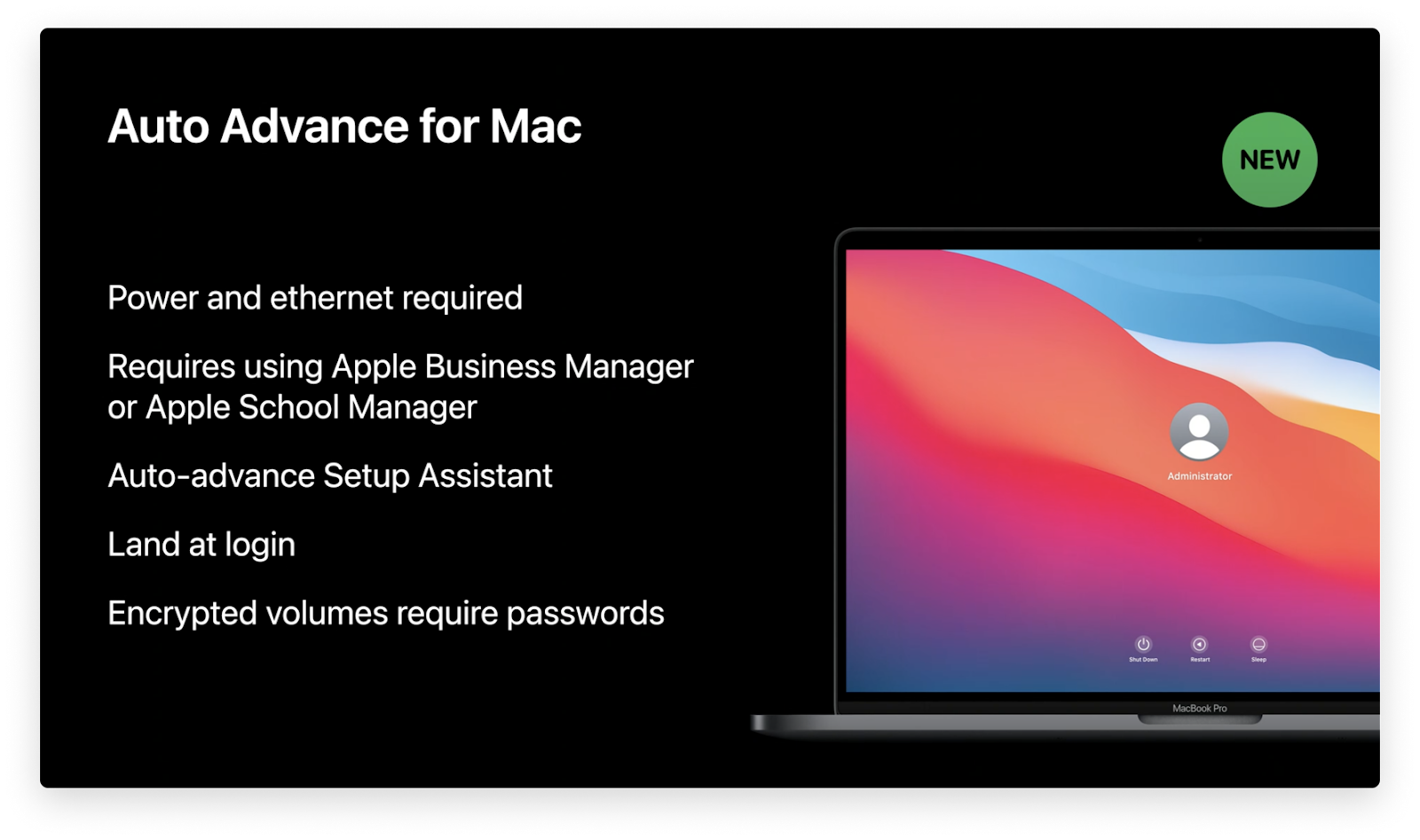 This makes it much easier for IT or users to set up Apple TVs. Rather than manually proceeding through Setup Assistant for every new device, Auto-Advance enabled devices can automatically bypass Setup Assistant so employees can use the device faster. The feature also lets you achieve unique workflows like automatically locking an Apple TV in presentation mode.

In macOS Big Sur, Auto Advance is coming to Mac. Similar to its Apple TV counterpart, when Auto Advance is enabled for a Mac, IT and users can completely bypass Setup Assistant. All that’s required is a power cord, an ethernet cord, and then turning the Mac on. The user will land on the login window faster, and the device will automatically be managed according to your business’ needs.

In lab environments or any other application where a large number of Mac computers are used, this is a game-changing update. Rather than manually setting Mac computers up one-by-one, Auto Advance for Mac will let users land on the login screen or go through a customized setup process defined by IT.

Although not exclusive to macOS Big Sur, Apple recently introduced a new method to to create Managed Apple IDs and streamline the employee login experience. If your business leverages Azure Active Directory as an identity provider (IdP), then you can use Federated Authentication to link your IdP with Apple Business Manager. What makes this possible is Apple’s implementation of SCIM (System for Cross-domain Identity Management). In a nutshell, SCIM lets IT automatically provision and deprovision users from Active Directory in Apple Business Manager. This wasn’t possible using the previous just-in-time (JIT) account creation method, which simply created accounts when a user signed into a Managed Apple ID with their Azure Active Directory credentials.

For a deep dive into this topic, you can read our guide to Managed Apple ID creation with Azure AD using SCIM & JIT, which is packed with everything you need to know about account creation with SCIM, including a step-by-step guide to set up and configure it.

In macOS Catalina, standard users had the ability by default to approve apps to access sensitive system features (like Contacts, Screen Capture, and microphone). However, IT had no power to enable these features via MDM – they were all considered “deny only.”

That changed in an early beta of macOS Big Sur. This update to PPPC prevented standard users from approving applications for sensitive system-level PPPC controls, such as Screen Capture and Input Monitoring. However, this made it impossible for standard users to approve access requests for common business apps, like Zoom. 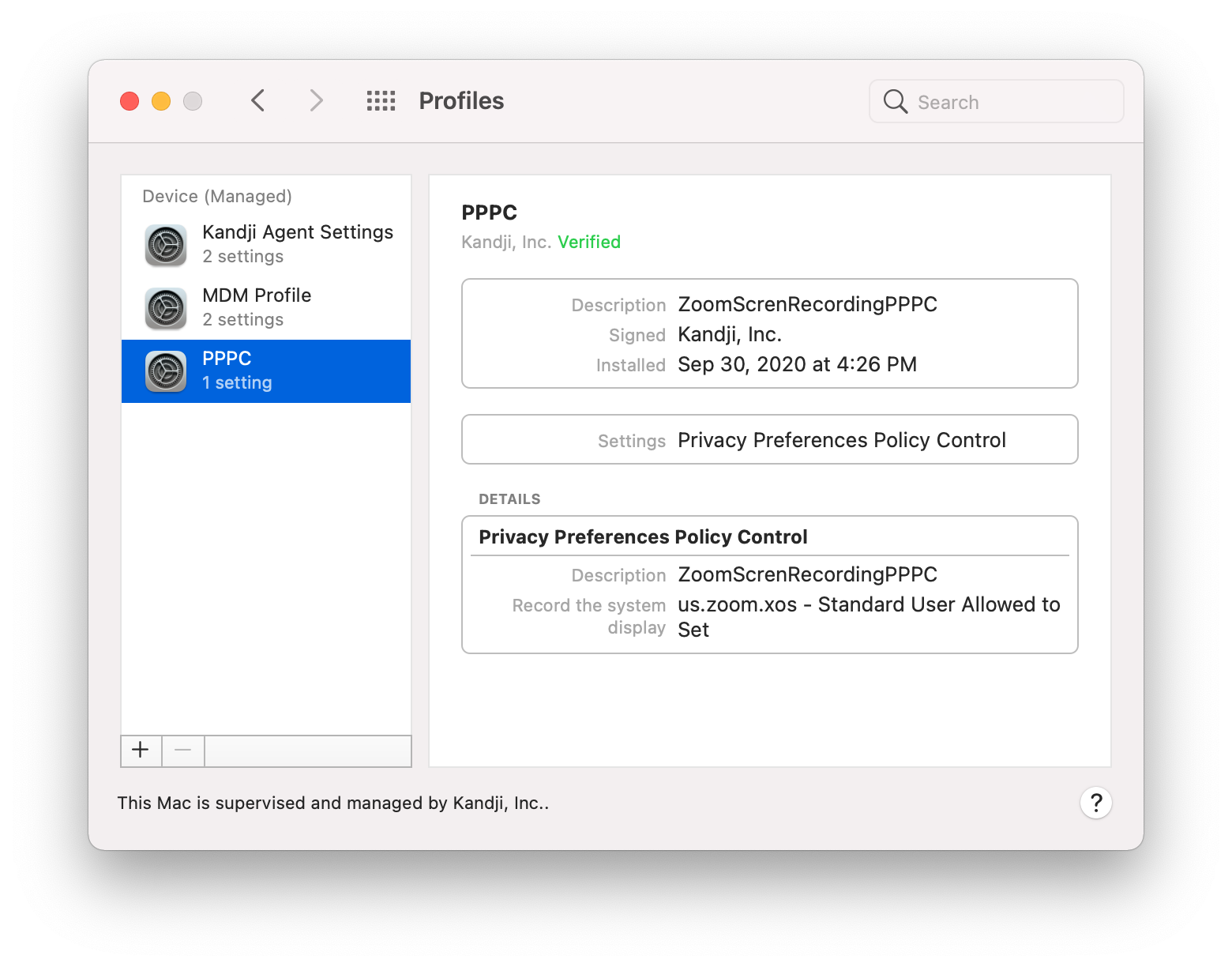 That’s where the most recent PPPC update comes in. Now, IT can use an MDM solution and the PPPC profile to allow standard users to approve defined applications for Screen Capture and Input Monitoring. In other words, IT can create a list of apps that allow standard user approval.

For a deep dive into the latest PPPC update, you can read our guide to PPPC changes in macOS Big Sur. We’ll walk you through the setup process for defining which apps allow standard user approval.

At WWDC 2020, Apple announced that Bootstrap Tokens are now required to approve and load Kernel Extensions (KEXTs) via MDM on future Apple Silicon devices running macOS Big Sur. This means IT won’t be able to complete tasks like installing updates via MDM without a Bootstrap Token on these future devices.

Bootstrap Tokens were introduced in macOS Catalina as encryption keys provided to an MDM server. They previously only assisted with enabling SecureToken for mobile network accounts or the Auto Admin account. Now with macOS Big Sur, Bootstrap Tokens will be leveraged to grant every user SecureToken when they sign in (this applies only if they sign in graphically), not just network accounts or the Auto Admin.

Another important reminder of a change made in macOS Catalina 10.15.4 is that macOS will automatically attempt to generate and escrow a Bootstrap Token to MDM anytime a Secure Token enabled user signs in.

You can read more about this in our guide to Bootstrap Token and SecureToken on macOS Big Sur. In that guide, we also cover the particulars of setting up Bootstrap Token for your MDM and manually generating and escrowing Bootstrap Token via Terminal.

At WWDC 2020, Apple announced that when loading Kernel Extensions on macOS Big Sur, a restart that rebuilds the Kernel Cache would need to be initiated by a local administrator via the Security and Privacy System Preferences pane or by MDM via a new option on the restart command.

Additionally, on future Apple Silicon based Mac computers, in order for an MDM solution to approve Kernel Extensions as well as install Software Updates, the device will need to have a Bootstrap Token escrowed to MDM (see previous section on changes to Bootstrap Tokens), and be enrolled into MDM via Automated Device Enrollment. Devices enrolled manually will have to enable this ability for MDM inside of macOS Recovery.

Apple announced that they’re transitioning the Mac to Apple Silicon, a broad term they coined to refer to their custom chips and other technologies. While most existing apps built for the Intel-based Mac will continue to run with Rosetta 2 emulation technology, Developers can begin updating their apps now to take advantage of the performance boost that Apple Silicon will provide.

In the press release, Apple stated that macOS Big Sur is packed with new features that will make the transition to Apple Silicon seamless. One of these features is the ability for developers to build Universal 2 application binaries that include support for both Intel and Apple Silicon. This has important implications for Mac admins.

Another exciting feature gives developers the ability to make their iOS and iPadOS apps available on macOS – without making any modifications. Apple will begin the transition near the end of 2020, and they expect it will be complete in about two years. Regardless, developers can prepare now, and IT can try to get ahead of the inevitable testing and approval processes necessary before they can begin deploying silicon-based Mac computers. In a future version of macOS Big Sur, MDM solutions will be able to deploy iOS applications to Apple Silicon based Mac computers.

You can read more about this in our Mac admins’ guide to Apple Silicon. In that guide, we also cover the particulars of why macOS will have the ability to run iOS apps, the new login experience, how macOS recovery is changing, the new Mac Sharing Mode feature, and more. 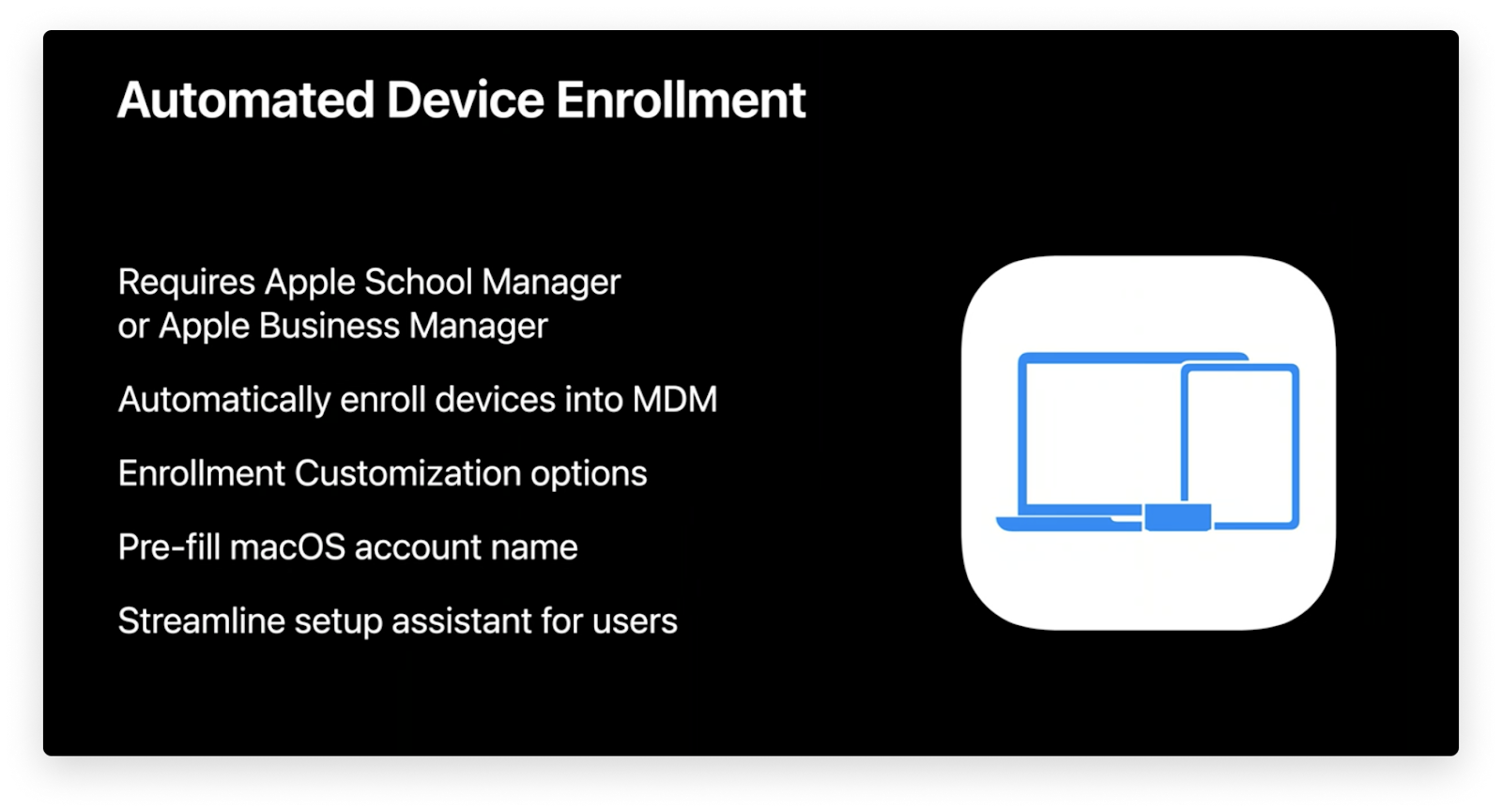 Using Enrollment Customization gives IT even more power over the enrollment process. This new feature lets IT add custom branding, consent text, and modern authentication to their teams during the setup period.

Because IT never has to interact with the devices physically, this is a great enrollment option for any business that needs to deploy a lot of devices. There’s also a great new feature to customize the enrollment process for your desired Setup Assistant workflow.

You can find more information about Automated Device Enrollment in our guide to Apple device enrollment methods, including ideal use cases, steps you need to take to set it up, and its compatibility with device supervision.

Apple announced a very powerful device management/Big Sur feature coming to the Mac Pro: Lights out Management (LOM). Lights Out Management lets IT remotely startup, shutdown, and reboot Mac Pro devices on their local network – even if the devices are unresponsive. 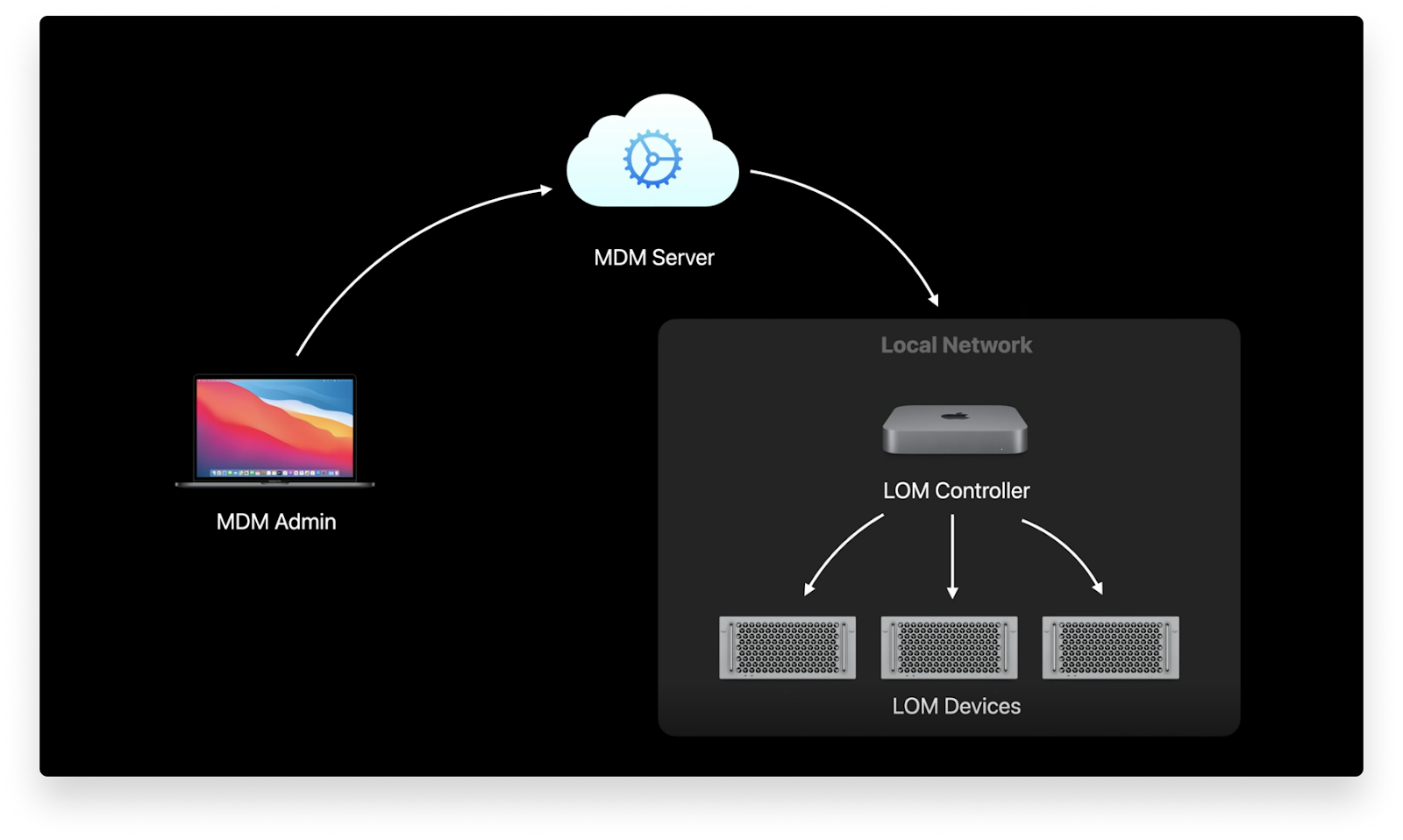 Managed Apps were a powerful MDM capability on iOS, and now they’re coming to macOS Big Sur. Leveraging Managed Apps for macOS will let IT remove apps with MDM commands, have apps automatically removed upon device unenrollment, and even convert some unmanaged apps into Managed Apps. 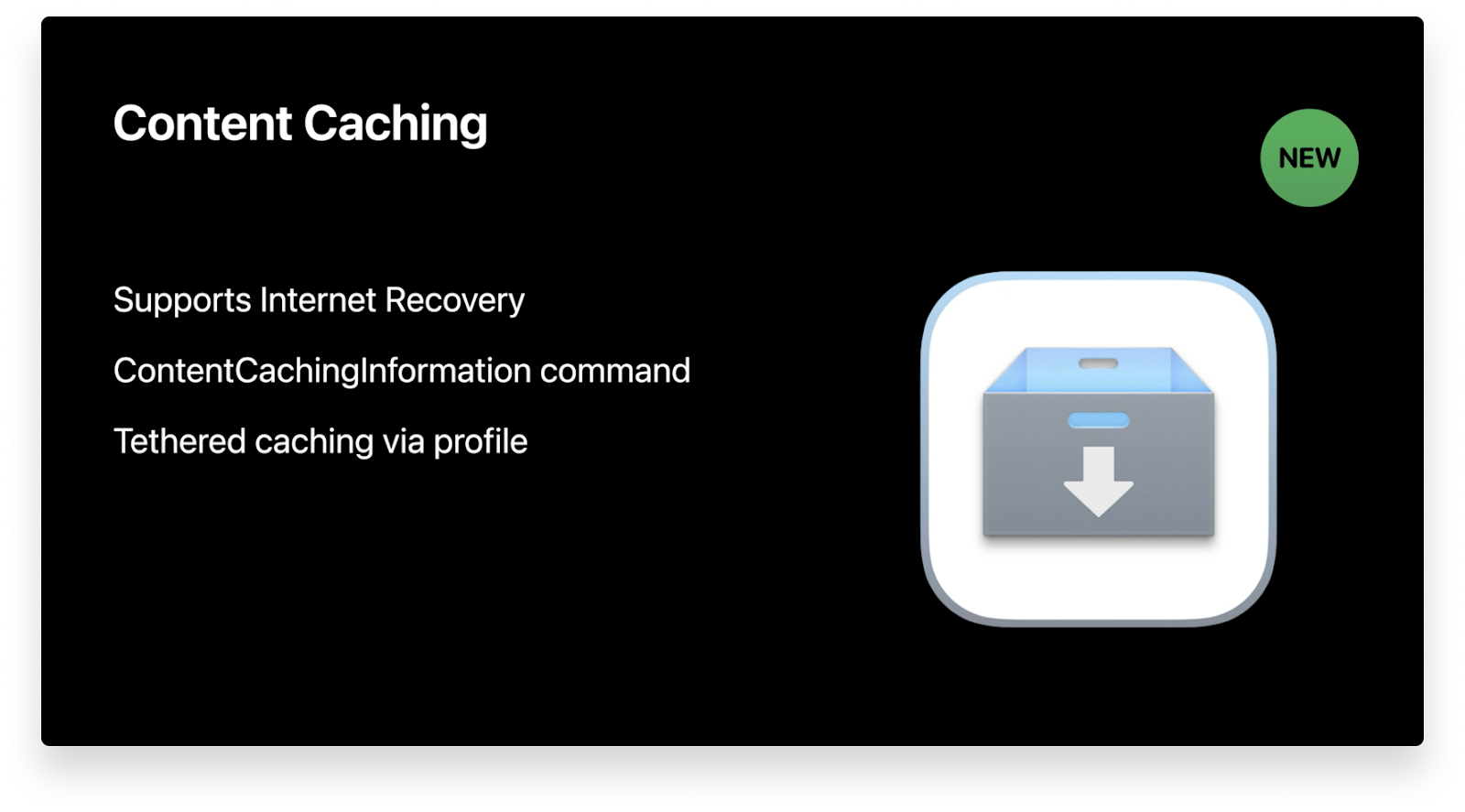 In macOS Big Sur, content caching has been expanded to support a wider range of data types and to include an Internet recovery feature. Apple also announced a new MDM command, ContentCachingInformation, that IT can use to see important caching metrics.

Apple also announced a few other security updates for macOS Big Sur. We’ll take a quick look at them here:

There are a lot of device management changes coming to macOS Big Sur, and the entire Kandji team is excited to continue building out support for them in our MDM solution. With powerful features like zero-touch deployment, one-click compliance, and offline remediation, Kandji has everything you need to enroll, configure, and secure your devices.