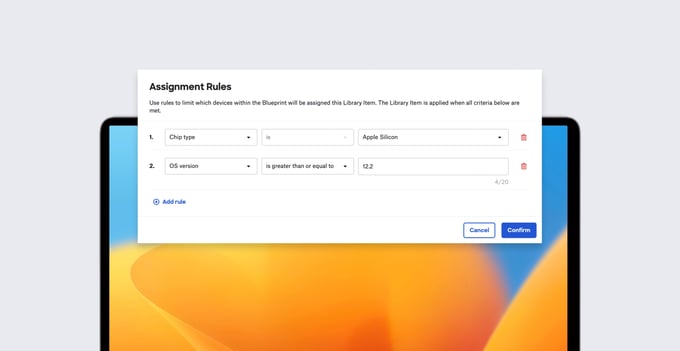 Blueprints are the cornerstone of Kandji’s device management platform. They streamline how you organize configurations and software and continually enforce parameters for managed devices. And now, we’ve made Blueprints smarter with assignment rules. These rules determine whether or not a custom app or script library item runs on the devices assigned to a given Blueprint.

Assignment rules use device attributes, including:

To implement assignment rules, edit a custom app or script library item. The library item has a new Rules section, where you can construct rules using inputs, operators, and values. Inputs are the device attributes listed above. Depending on the input, operators can include standard values such as Is, Is Not, Is One Of, Contains, and so on. You can build complex rulesets by combining multiple rules. When you assign the custom app or script to a Blueprint, the subset of devices in that Blueprint where the rules evaluate to true will receive the library item.

Assignment rules give admins more flexibility and, in turn, reduce the number of Blueprints that exist only to cover edge cases. It adds another layer of configurability to Blueprints, on top of our recent release allowing multiple instances of Auto Apps and Managed OSes. This added configurability makes Blueprints more powerful than ever before—and this is just the start.

Assignment rules are available now in Preview. For more on how assignment rules work and how to implement them, check out our What’s New in Kandji? video and the Using Assignment Rules support article.