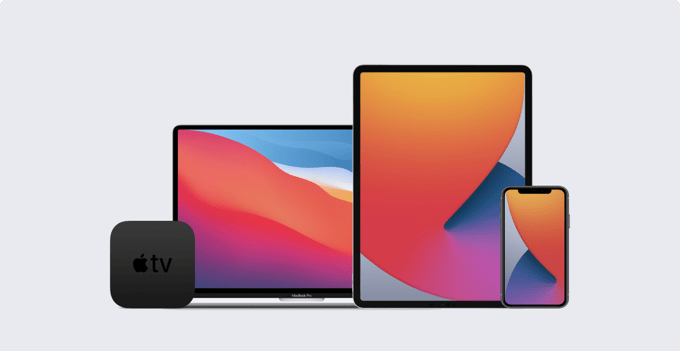 Every year, Apple releases all of its major device management updates at its Worldwide Developers Conference (WWDC) event — and WWDC 2020 has been packed with big news.

In this article, we’re going to break down some of the biggest announcements that came out of the conference. Here’s a quick overview of what we’ll cover:

At WWDC, managing Apple devices got a lot of attention, but one of the biggest device management updates involved deploying and managing macOS Big Sur at scale. In this section, we’re going to cover all of the device management highlights before taking a look at new security features for Mac devices.

In this post, we are only covering these items at a high level. If you're looking for a deep dive on everything that's new with macOS Big Sur, read our post: macOS Big Sur & MDM: The Comprehensive Guide for Mac Admins.

Apple has rolled out the latest iteration of macOS with continued support for the latest device management (MDM) features, like Automated Device Enrollment. With this enrollment method, all the user needs to do is boot up their Mac devices, select a language, and connect to a Wi-Fi network. 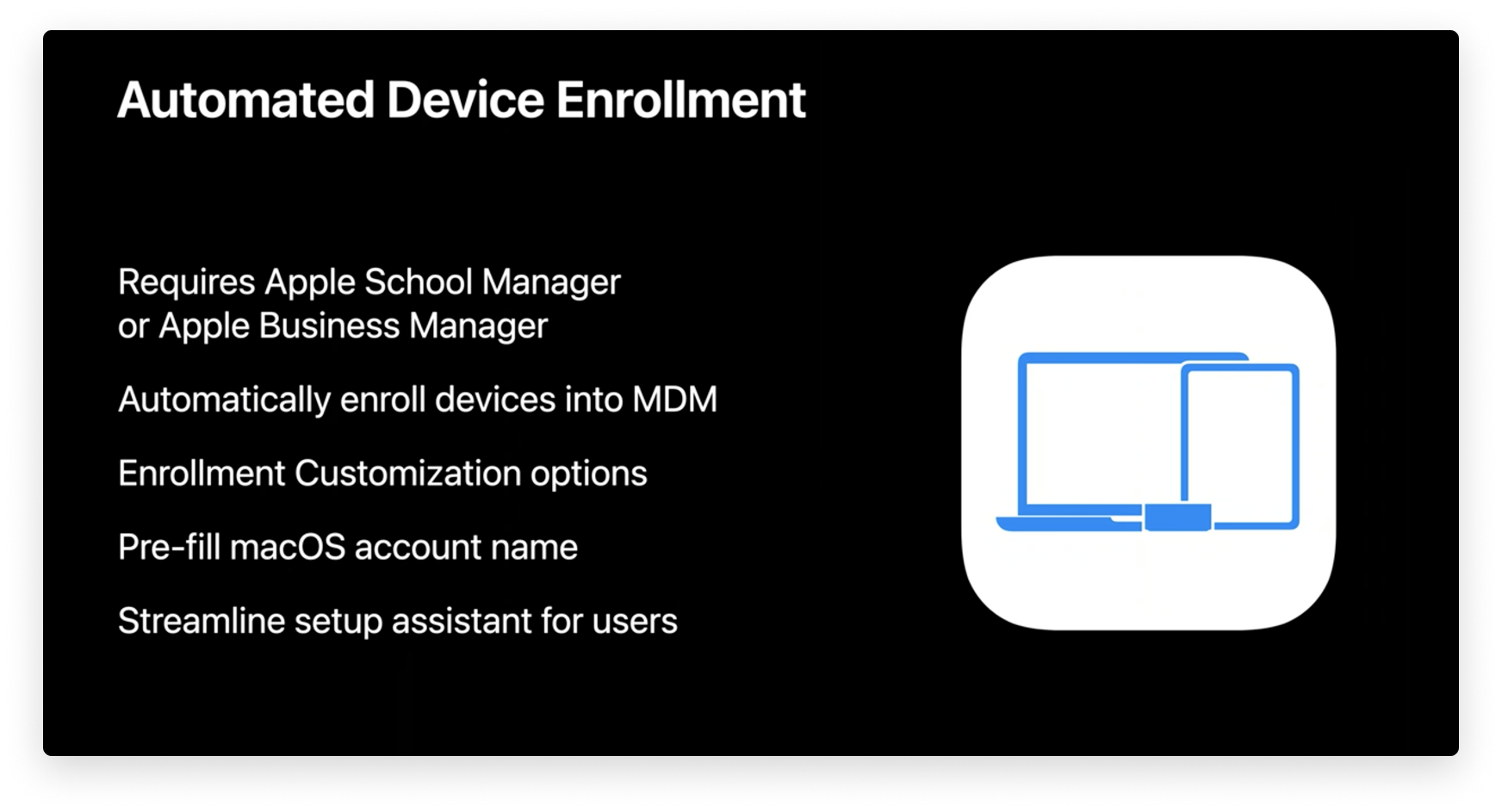 From there, company-owned Mac devices are automatically enrolled in the company’s MDM solution. That means IT administrators won’t have to touch the devices to set them up manually, and users can start using their new Mac devices sooner.

Using Enrollment Customization gives IT even more power over the enrollment process. This new feature lets IT add custom branding, consent text, and modern authentication to their teams during the setup period.

Using Enrollment Customization with your Identity Provider (IdP), IT can provide a better user experience while using modern authentication methods (such as Microsoft Azure Active Directory, Okta, Ping, and more) by auto-filling full name and short name credentials in the “Create a Computer Account” page.

IT administrators can further streamline the setup assistant by choosing which steps are hidden or shown to users, such as Siri, Touch ID, FileVault Disk Encryption, Analytics, Location Services, and more.

A few years ago, Apple introduced a feature that streamlined setting up Apple TV at scale — and now, they’re bringing it to the Mac. Using the Auto Advance feature, users just have to plug in a Mac to power and ethernet cords, and then turn it on.

Once the Mac starts, it will automatically skip all setup screens, bringing the user directly to the login page. This is by far the fastest way to set up a Mac, and you can still customize the setup process to meet your company’s needs.

To use Auto Advance, you’ll need to manage your devices using Apple Business Manager, and while only power and ethernet are required, your network must support DHCP. If you use encrypted disks, you’ll be required to enter your password.

Lights Out Management for the Mac Pro

We also got some news about managing the Mac Pro at WWDC. Managing Apple devices at scale has always been a fixture of these conferences, but WWDC 2020 introduced a really exciting new feature called Lights Out Management.

With Lights Out Management (LOM), IT administrators can remotely startup, shutdown, and reboot one or more Mac Pro devices — even if they’re unresponsive. This is made possible by sending a command from your MDM solution to the MDM controller on your Mac network. 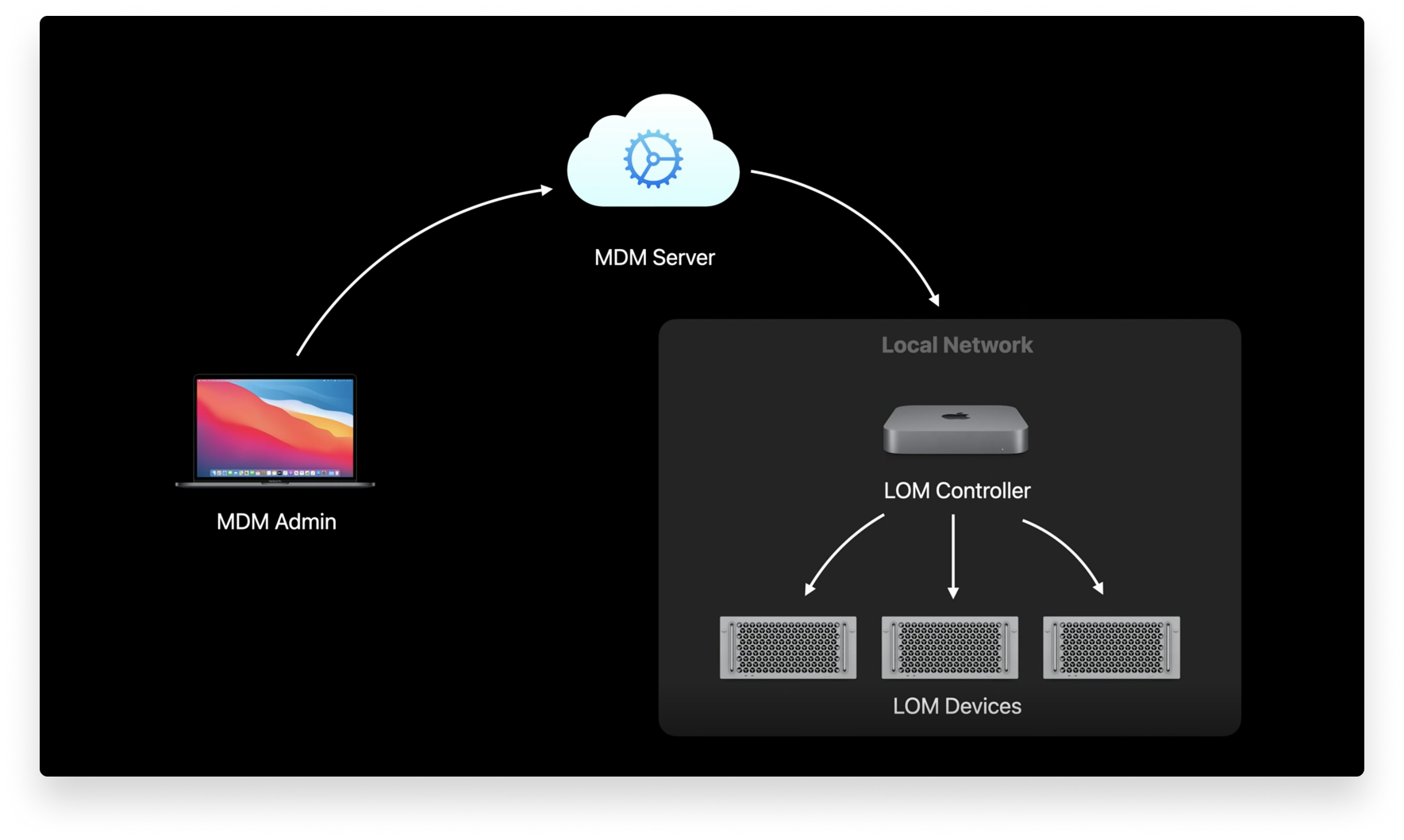 There are three requirements to use Lights Out Management:

When an Apple device is supervised, IT administrators can exercise more control over it, letting them automate actions, add restrictions, and do things like bypass activation lock, install apps “silently,” push OS updates remotely, or filter web content. 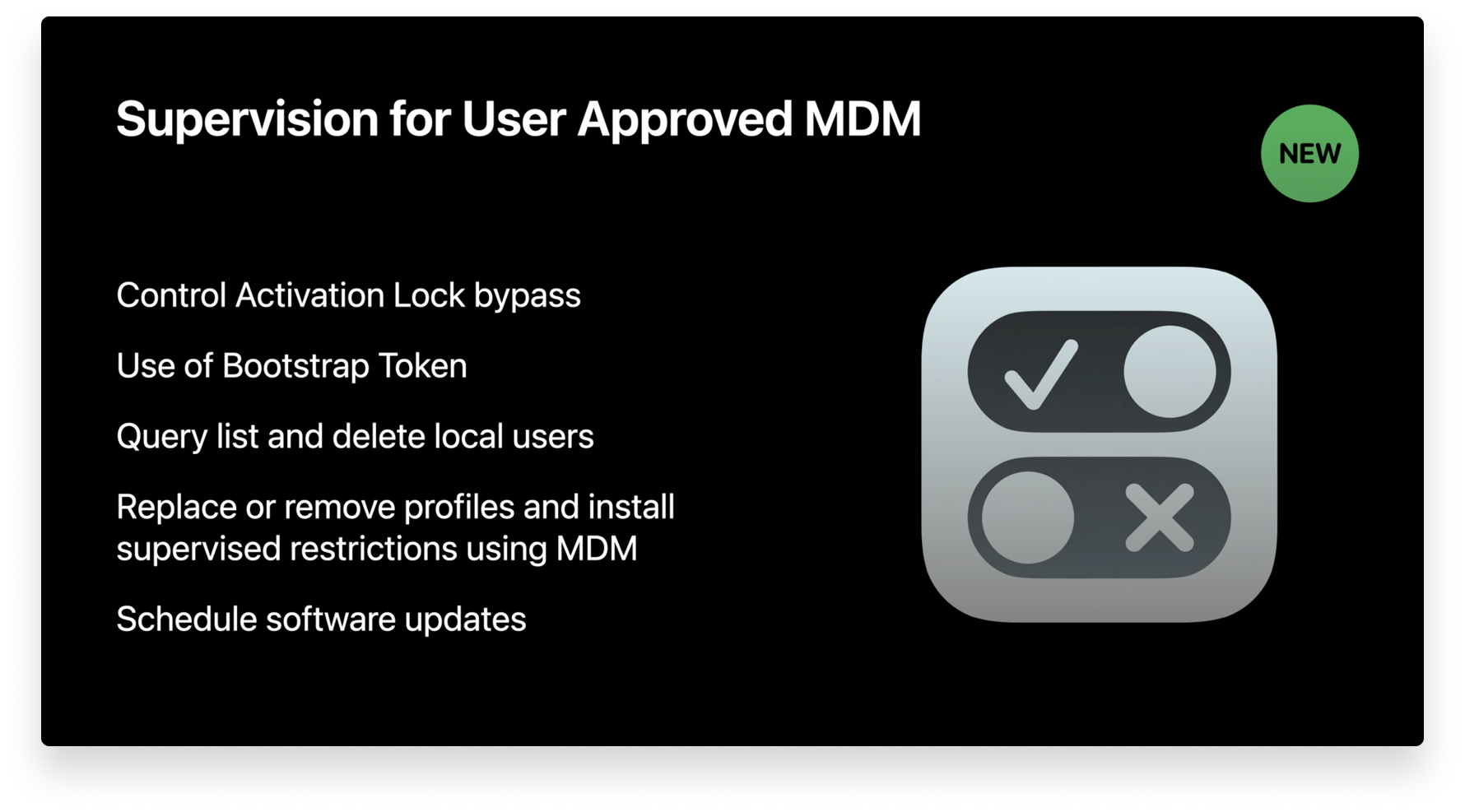 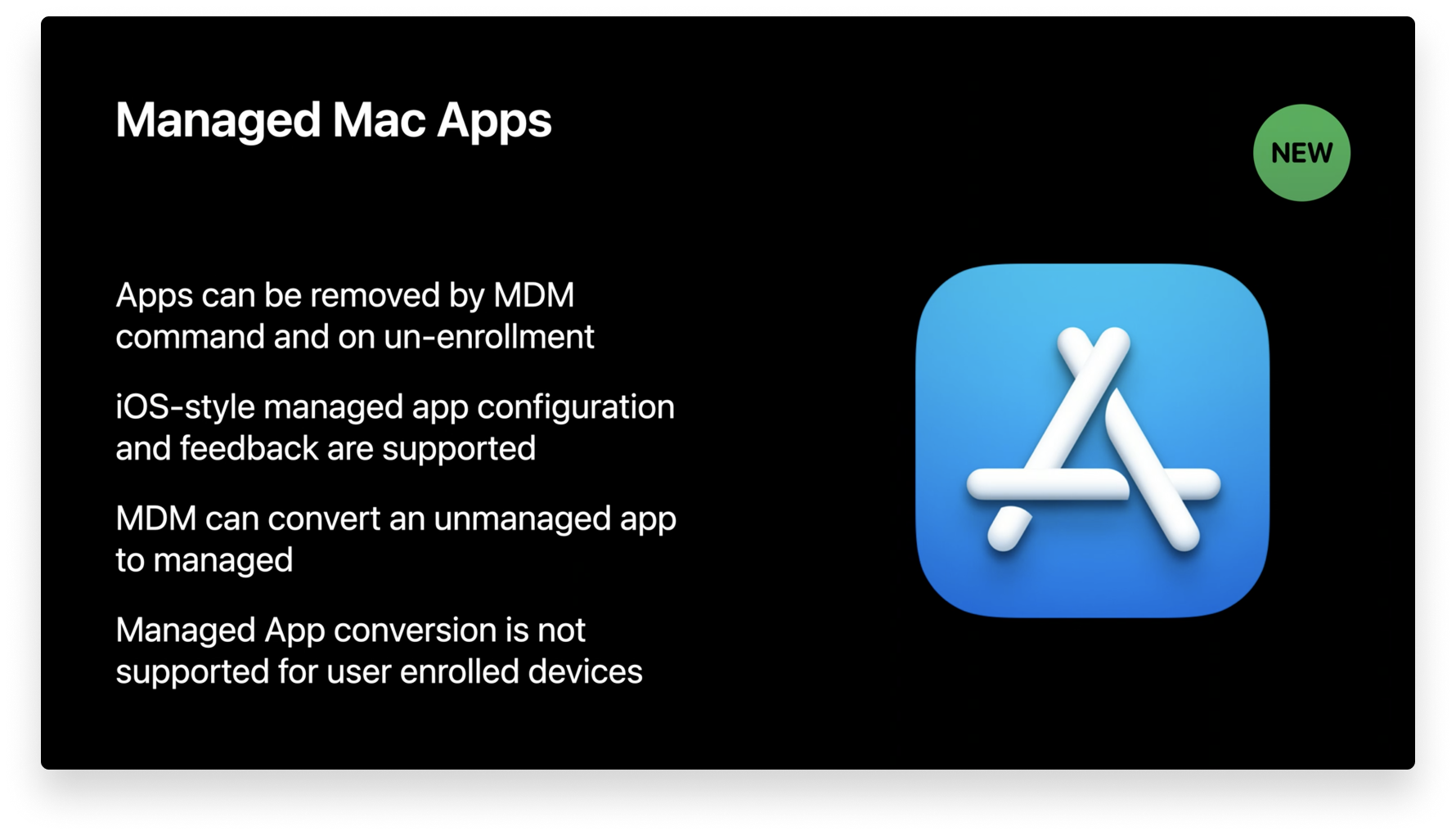 While previously only available for iOS, at WWDC 2020 Apple introduced Managed Mac Apps. This new feature will let IT administrators remove apps with MDM commands or have apps removed upon device un-enrollment. Managed Mac Apps also support iOS-style app configuration and feedback, and IT can use MDM commands to convert eligible unmanaged apps into Managed Apps. However, Managed App conversion isn’t supported for user-enrolled devices.

Apple released content caching for Mac a few years ago in an attempt to speed up download rates and reduce Internet usage with Mac apps, books, iCloud content, software updates, Xcode components, and more. Now, content caching supports a wide range of data types, and it even supports Internet recovery. The Internet recovery feature doesn’t include the initial boot image, but the recovery image is cached so you can restore Mac devices on your network quickly. 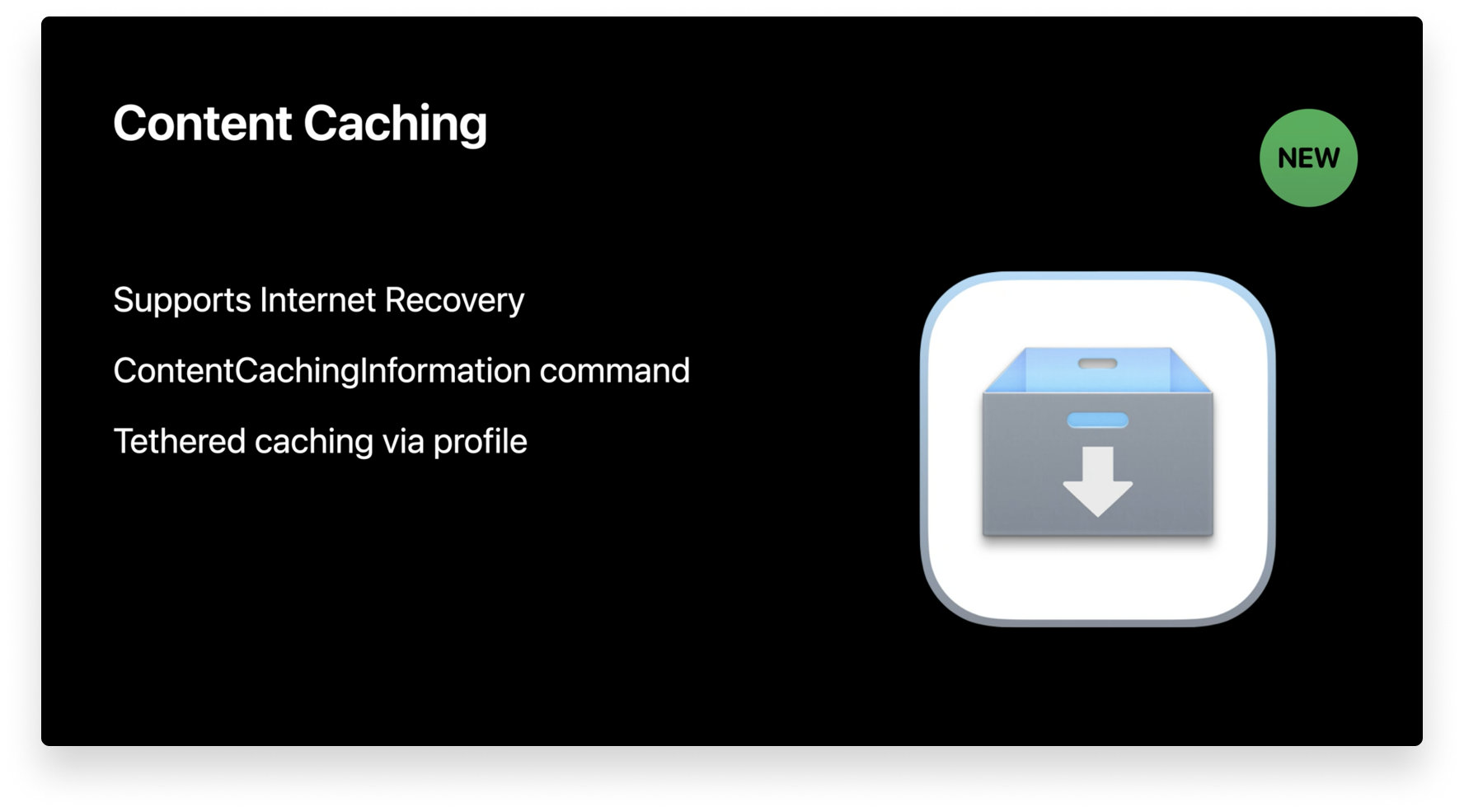 When content caching was introduced to macOS, Apple released a new tab in Activity Monitor that displayed important performance metrics. At WWDC 2020, Apple announced that those metrics are now available via the new ContentCachingInformation MDM command. This will help IT determine if content caching is in use, gauge how it’s being used, and help users download apps faster.

At WWDC 2020, Apple announced that Bootstrap Tokens are now required to approve and load Kernel Extensions (KEXTs) via MDM on future Apple Silicon devices running macOS Big Sur. This means IT won’t be able to complete tasks like installing updates via MDM without a Bootstrap Token on these future devices.

Bootstrap Tokens were introduced in macOS Catalina as encryption keys provided to an MDM server. They previously only assisted with enabling SecureToken for mobile network accounts or the Auto Admin account. Now with macOS Big Sur, Bootstrap Tokens will be leveraged to grant every user SecureToken when they sign in (this applies only if they sign in graphically), not just network accounts or the Auto Admin.

Another important reminder of a change made in macOS Catalina 10.15.4 is that macOS will automatically attempt to generate and escrow a Bootstrap Token to MDM anytime a Secure Token enabled user signs in.

Apple has taken measures to prevent users from accidentally installing configuration profiles. The ability to download profiles was introduced in iOS and iPadOS. However, in order to install the profile, the user must download it and then manually install it via System Preferences. Because profiles can configure devices, it’s important that they only come from trustworthy sources, so this extra measure ensures that users do not accidentally install profiles.

The same downloaded profiles capability is now available in macOS. When a user downloads a profile, a notification will prompt them to review it in Settings. They can visit the Profiles section to review the new profile, where they will have the option to delete or install it.

Apple also introduced security measures to prevent silent profile installs at WWDC. Managing Apple devices requires limiting dangerous actions that users may accidentally perform. As of macOS Big Sur, profiles can no longer be completely installed using Terminal. If a user attempts to install a profile using the Command Line, it will be treated as a downloaded profile, requiring a visit to Settings to complete the installation. 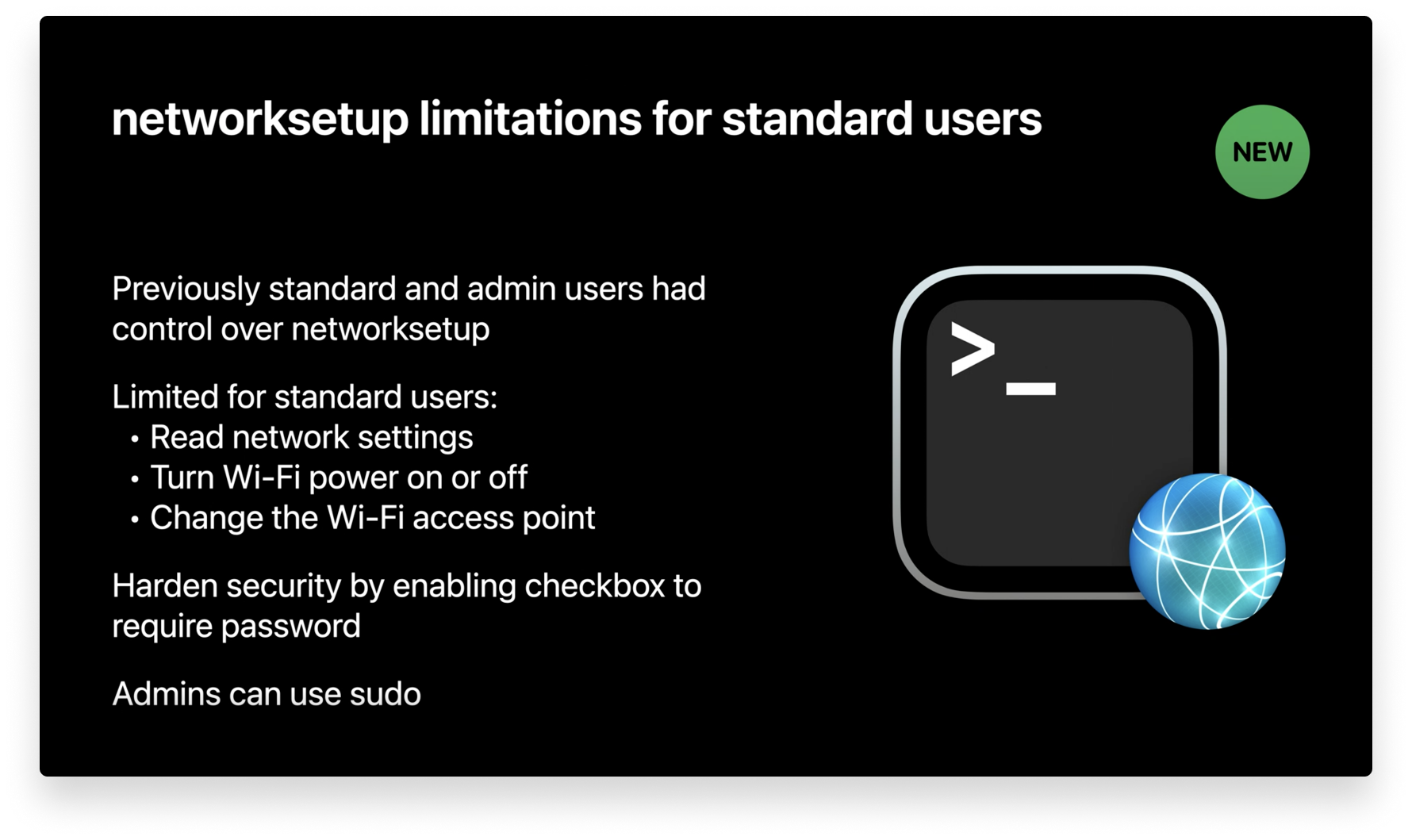 Standard users no longer have the same level of control over networksetup as admins. Now, standard users are limited to reading network settings, turning Wi-Fi power on or off, and changing the Wi-Fi access point. Admins still have full capabilities.

In order for Automated Device Enrollment to know which devices to enroll upon activation, it uses device serial numbers. These are unique twelve-character strings of numbers and letters that contain information about when and where a device was built, along with the device’s identification code.

This information helps Apple ensure product quality, but it can also be used maliciously. So, Apple announced a new serial number at WWDC 2020. Now, completely random ten-character serial numbers are being issued to devices. Third-party programs will need to be able to support the old and new serial number format moving forward.

Apple Configurator helps IT administrators configure iPhones, iPads, and AppleTVs using a USB cable. Apple announced at WWDC 2020 that Apple Configurator now supports Apps & Books Locations. These Locations, which are provided by Apple Business Manager, can refer to different places within an organization where devices use different Apps and Books.

IT administrators can now go to the Account menu and select the Location they want to use. This will display a unique collection of Apps and Books for each Location that has been configured in Apple Business Manager.

Apple has released the setup assistant payload for iOS. To use the payload, IT administrators will specify the skip keys they used in Automated Device Enrollment, which will take effect in future upgrades.

This payload will let you skip setup assistant pages during an upgrade that you didn’t know about when you were initially setting up a device. Skipping these pages is now possible on all supervised devices, not just those enrolled using Apple Business Manager.

Shared iPad is a new feature for iPadOS that can give users a personal experience on a shared device. Previously only available for education customers, Shared iPad can now be used for businesses by leveraging Apple Business Manager and their MDM solution. (For a deep dive on this, read our guide to Shared iPad for business.)

Shared iPad also supports dynamic numbers of cached users, so you can set the amount of storage for each user — rather than just a fixed number of users. IT administrators can also now delete all users at once, and sign in for temporary sessions. This lets users use the device without creating an account.

Previously, IT administrators could prevent users from deleting apps by locking the home screen. While this ensured that users never deleted vital business apps, it took away some personalization for users.

Now, IT can mark critical apps as non-removable, while allowing users to rearrange, delete, and install other apps. If a user tries to remove a non-removable app, the user will be alerted that it cannot be done.

To prevent sensitive data from being shared, Apple announced at WWDC 2020 a new control for notification previews. This is a new key in the notification settings payload called Preview Type, which controls when notifications are shown (always, when unlocked, or never). This is only available on supervised devices. 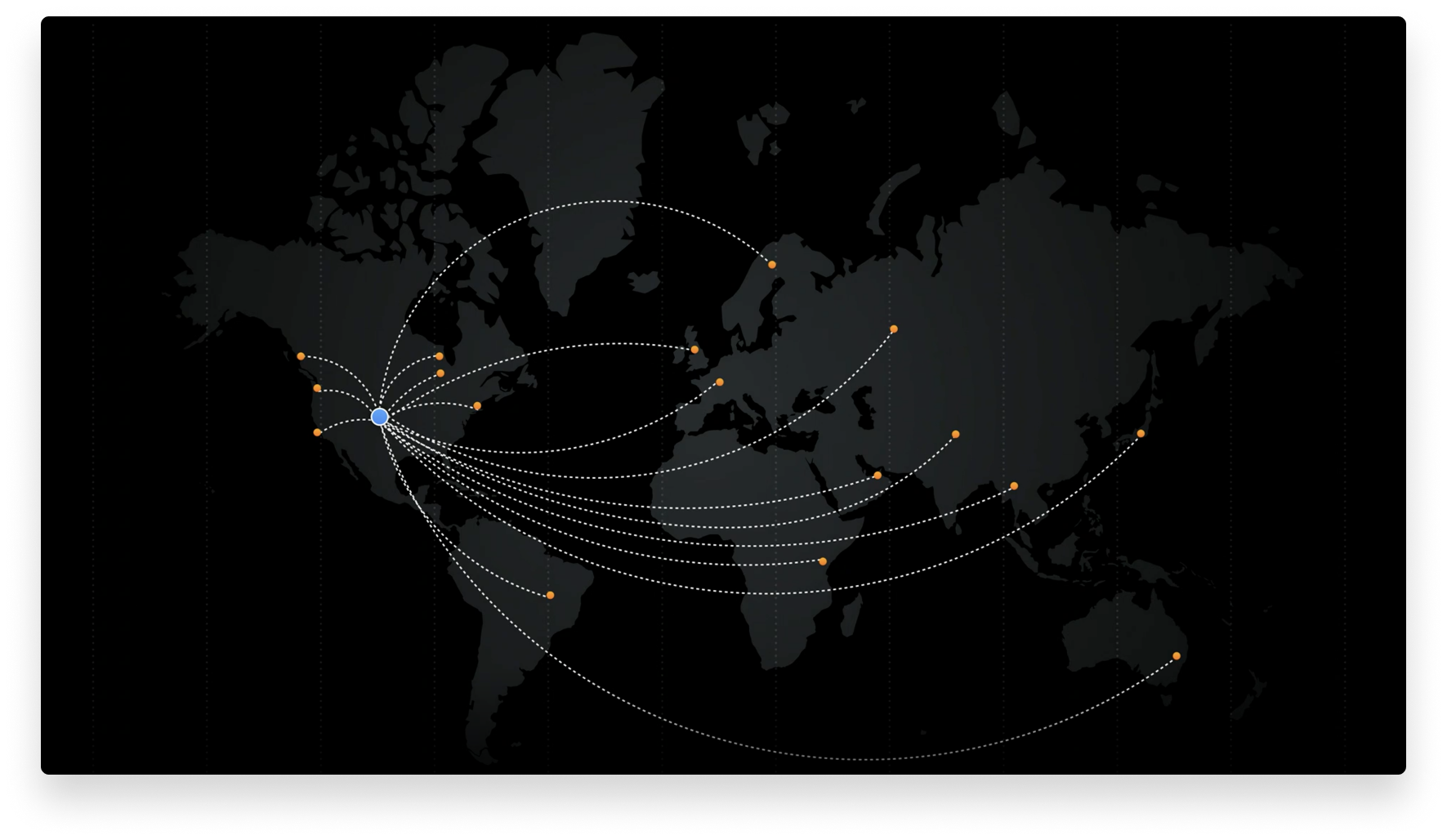 When managing remote devices in multiple countries, defaulting to your MDM server’s timezone can cause a lot of problems, like authentication issues. This is why Apple introduced the new Set Timezone MDM command at WWDC 2020. This new command lets IT administrators choose the timezone for each device.

Apple announced Per Account VPN at WWDC 2020, which lets IT administrators choose which VPN accounts should use. This can be used to choose replacement VPNs for Contacts, Calendars, and Mail domains, and it can also associate accounts with VPNs (much like Per App VPN).

As of iOS 14, devices use randomized MAC addresses when associating with Wi-Fi networks. If a device fails to join the network, it will revert back to its hardware MAC address. This setting can be disabled by users in Settings, or it can be disabled in the wifi payload.

At this year’s WWDC, managing Apple devices took up a lot of the spotlight. The whole team here at Kandji is excited to continue to support new features within our MDM solution so you can get the most out of your Apple fleet. With powerful features like zero-touch deployment, one-click compliance, and offline remediation, Kandji has everything you need to enroll, configure, and secure your devices.