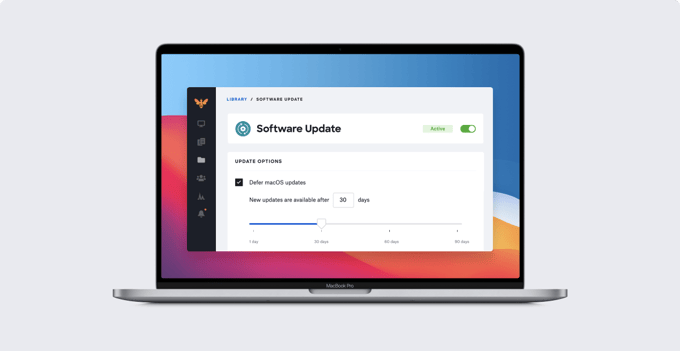 With the public release of macOS Big Sur back in November, a lot of IT administrators are busy testing their company Mac computers for compatibility with the latest OS. At Kandji, we've gotten a lot of questions about how other Mac admins are approaching the transition to Big Sur. So, we compiled some of the most common questions and asked for input from several Mac admins.

In this article, we're going to explore some of the answers we got about how and why Mac admins are deferring updates, how the upgrade process is going in their environment, and what advice they have for their peers.

If You Did Defer macOS Big Sur, Why?

During our testing of the beta release of Big Sur, we found various applications in use that were not yet compatible with Apple's newest OS.

Beranger chose to defer by using application blocking. He said:

In the past, we have always blocked the installer for any OS release and have found this solution easy to maintain.

Plenty of Mac admins in our survey shared this sentiment, including Chris Korhonen, CTO at Share Local Media, who used application blocking to defer the update for 60 days because "it seemed like the easiest way to do it via Kandji."

We did not want to scramble in order to address any compatibility issues with applications or incompatibilities introduced with Big Sur.

We asked Ashar why he deferred the update, and he told us:

[We deferred] on the advice of forums and the Kandji MacAdmins Slack channel chat. We need to test and make sure it worked for our tech team.

We don't normally use a deferral profile, and we were not sure how long we would have to block things for.

A few other admins in our survey used both application blocking and the software update deferral payload, such as Johnny Ireland, IT Systems Engineer at Jones IT Consulting. When asked why he chose this method, he told us it was the "simplest option I have seen so far," and that it was "recommended to me from the MacAdmin community."

When we asked Ireland why he deferred the update, he told us:

Our Endpoint Detection and Response platform of choice didn't have a Big Sur ready agent available on day one.

Ankit Lodha, IT Manager Xisché & Co., also used both application blocking and the software update deferral payload to defer Big Sur more than 90 days, calling it the "easiest way to do it."

Lodha said he deferred the update because:

Many of the internal apps we use aren't updated yet or continue to be buggy on the OS.

If You Didn't Defer macOS Big Sur, Why?

Some of the Mac admins we surveyed chose not to defer Big Sur, such as Robby Barnes, Director of Technology at 2Fifteen Tech. Barnes offered day-zero support for the update.

When we asked him what the upgrade process was like, he told us:

We looked at a list of the things that we felt were most likely to potentially have issues, like virtualization or software that is less commonly used. We took a list of that software and tried running it in a test environment as much as possible before allowing the install. For clients that we rolled it out to, we tried to help them be excited about the new software experience, rather than focusing on the bugs that may present themselves.

Once You Were Ready for Big Sur, How Did Your Upgrade Go?

By the time they took our survey, many of the Mac admins who initially deferred the update had upgraded some or all of their systems to Big Sur. We asked them how they prepared for and managed the process.

In the last section, Beranger told us that he ran Big Sur beta tests and found that a few apps were not yet compatible with the latest OS. Because of this, he deferred the update by more than 90 days and isn't ready to roll out the update to his user base.

Here's what he told us about the upgrade process:

So far, we have only had a couple test systems and VMs that we have installed Big Sur on. We have not yet rolled out the OS to any of our user base, outside of those few testers in our IT department.

Similarly, Korhonen told us that he and his engineers ran the Big Sur beta on their test machines for months, but they haven't yet rolled it out to user devices. Here's what he had to say:

I've been running the beta on a test device for many months, and allowing some of our engineers to do the same. As we've been doing this, it has honestly proven to be mostly stable, as we have found incompatibilities, we've been taking note and been in communication with the relevant vendors.

After deferring the update for 30 days and completing the testing process, Ashar and his team were able to roll out the update to all of their users. Here's what he told us about the process:

We've tested all of the apps we need on two laptops. Then deployed Big Sur through profiles. The process was challenging. I had to create an intermediary profile to move laptops to and deal with the FileVault changes. Then move them to a final profile. A couple of laptops had issues.

Though he was initially concerned with a compatibility issue, Hael was able to upgrade his machines after a 30-day deferral. He walked us through the upgrade process that he and his team went through:

Used VMs to test Big Sur during beta and did usual deployment, upgraded IT machines first, got another initial round of testers. Announced to the company that Big Sur is unblocked and [set a] deadline for upgrading.

Ireland deferred the update since his EDR platform didn't have an agent available on day one. He hasn't upgraded users yet and is still running tests:

Installed macOS Big Sur on a testbench device and analyzed how it worked with my organization's apps, wiped the machine and tested the DEP process using Kandji and macOS Big Sur to see if any issues would arise from that.

What's Your Advice to Other Mac Admins About Deferring or Upgrading to Big Sur?

We asked all of the Mac admins in our survey if they had any advice about the deferral or upgrade process. Here's what they had to say.

Consider Holding Off Until 11.2

I would caution anyone who is thinking of upgrading to hold off, at least until Apple releases an 11.2 revision of the OS. Historically I have found that by the time the x.2 revision is released, Apple has dealt with the majority of bugs that have come up since the initial public release of the OS.

Take Your Time and Deploy in Batches

Take your time and test it thoroughly…when deploying, do it in batches.

Wait a Few Months for Issues to Be Resolved

In recent years, we have found fewer and fewer issues with macOS updates unless you have a highly specialized use-case. [That] said, I'd still advise waiting a month or two after public release for any major issues to be resolved before going all in. It's also critical to identify those in your organization with specific needs (e.g., software engineers, graphic designers). These are often good candidates for a pilot rollout.

While Testing, Focus on Maintaining Compliance

If working in an organization that adheres to a compliance framework (SOC 2, ISO, HIPAA, etc.), prioritize testing on services and settings that you currently enforce to maintain compliance.

Checking the compatibility of your software stack with Apple silicon devices is almost more important than just testing Big Sur.

Test everything and only upgrade if you need to right now. Wait for machines to come back to you and upgrade in person.

Everyone knows their environment, and shouldn't take unnecessary risks if they believe that it's actually risky. At the same time, try to share in users' excitement about running new things from Apple. New experiences from Apple are a big part of why we are all Apple fans!

Enroll in AppleSeed for IT and Submit Feedback to Apple

AppleSeed for IT is a program that helps organizations test new Apple beta software. By enrolling in the program, you’ll gain access to the latest prerelease software versions — which you can test in your environment before upgrading your users.

You’ll also be able to send feedback directly to Apple’s development team. Using the dedicated review queue, your bug reports and enhancement requests will be funneled to the right members of Apple’s team.

The program also lets you engage with other participants on a forum for IT admins. Here, you can discuss testing plans and other topics. This is just scratching the surface — for a closer look at AppleSeed for IT and specific instructions about submitting feedback, view Apple’s AppleSeed for IT guide.

What Big Sur Features are Mac Admins Most Excited About?

Beyond the technicalities of deferring and upgrading the latest company Mac computers, it's clear that everyone is excited to see what new features Apple has in store for us.

When asked what feature he's most excited for in Big Sur, Beranger told us:

I am happy to see Apple moving away from kernel extensions and using system extensions in their place. This is proving to be a bit of a headache initially though, as developers try to catch up with the change.

Korhonen told us that he's looking forward to some of Big Sur's MDM updates:

From an IT admin perspective, some of the MDM changes to supervision are welcome. As a user, I like the continued iteration and refinement of the system, and the adoption of Catalyst for apps like Messages, bringing them to feature parity with their iOS counterparts.

Similarly, Ireland is looking forward to "manual device enrollment being a new route to device supervision."

Lodha said he's excited to see the "change in UI."

Barnes told us he's excited for universal apps and the ability to support some of his clients' M1 Mac computers:

To learn more about what's new, read our comprehensive guide to macOS Big Sur & MDM. There are a lot of exciting changes coming to the Mac, and the entire Kandji team can't wait to continue building out support for the latest features in Big Sur. We're proud to have provided release day support for Big Sur in our MDM solution. With powerful features like zero-touch deployment, one-click compliance, and offline remediation, Kandji has everything you need to enroll, configure, and secure your devices.